So, now that the dust has settled, has Robert Barker, designer of the Skin Deep Garden, at RHS Chelsea 2018, managed to get any sleep? (See last week’s post.) “Not really!” he said at the show’s Press Day on Monday. 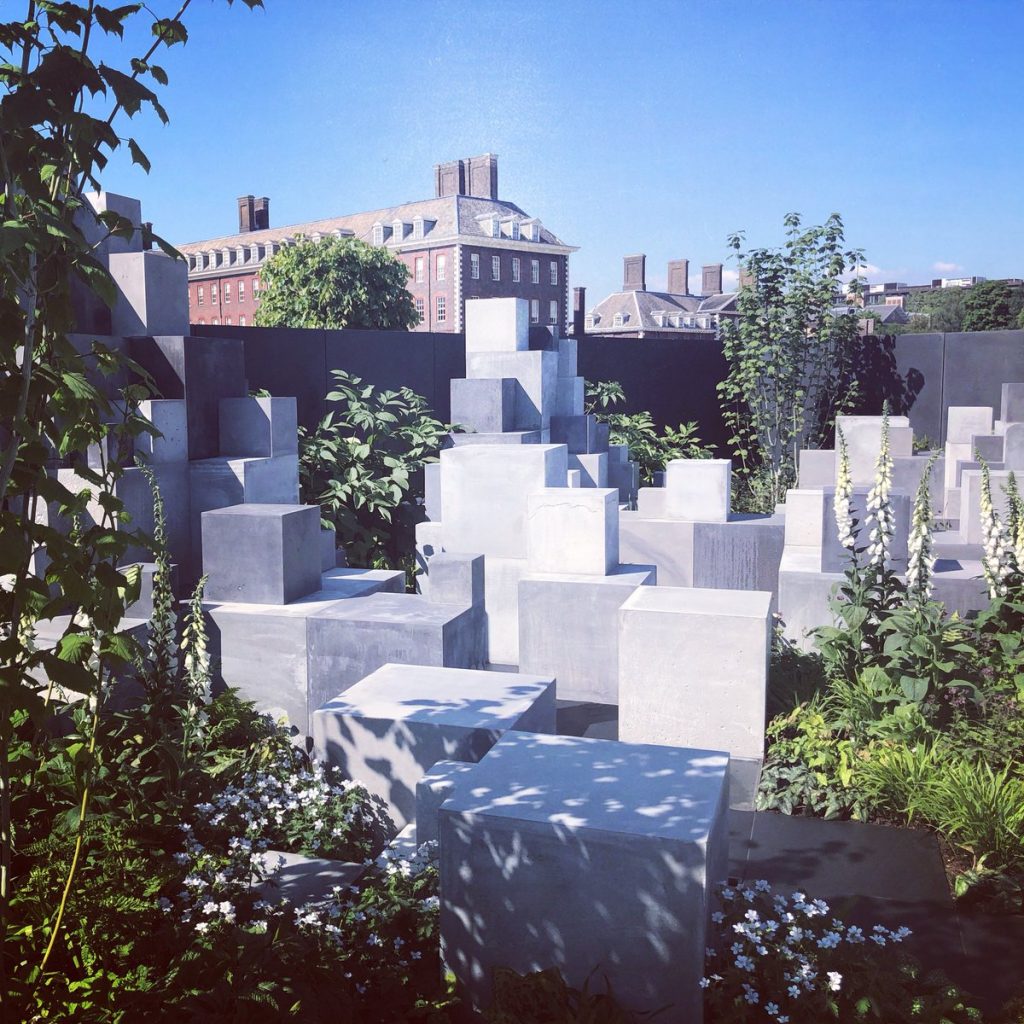 Now fully realised and visible “in the flesh”, the garden’s combined monumentality and intimacy is clear. This is a clever complement to the garden’s theme, as skin conditions are both an intimate and a monumental issue for many sufferers.

At its base, literally, is our Blue Black Slate, treated with Dry Treat Intensifia, to enrich the subtle tones of path that runs the length of the garden. With the slabs set on the diagonal as you enter, it urges you on to where it narrows to the extent that only one person at a time can negotiate the winding route. The deep colouring, placed close to the differing greys of the concrete blocks, anchors the sculpture in place as much as the carefully shaved 600x600mm slabs by reflecting the 600x600x600mm concrete blocks. 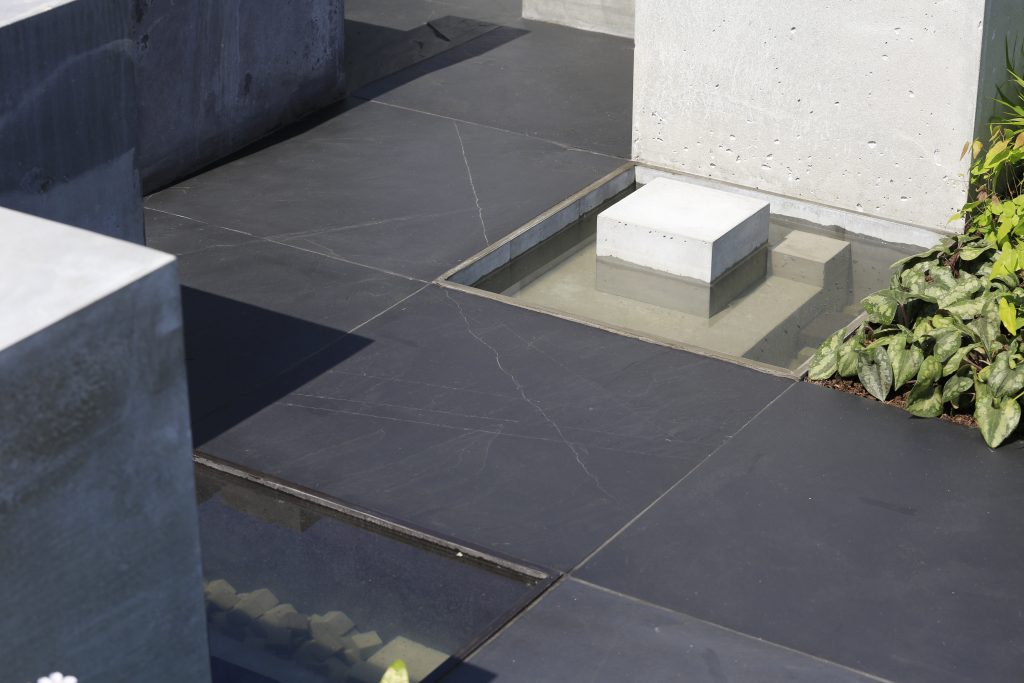 The colouring is also picked-up in the black screens on the garden boundary. Made of fibreglass moulded from burnt panels of MDF, they offer subtle character that picks up textures and markings in the Blue Black Slate. “The stone was very easy to lay,” added Robert. “It’s lovely to walk on, with lots of character.” He laid the path with close attention to the slate’s surface. “We used the pieces with the most character towards the end, so the path has a flow to it.”

The slabs have been pointed with Ardex Flex FL. The original choice was for a contrasting colour, but when Robert decided this looked too bright Managing Director Steve Walley suggested Innocent Black. “It’s more subtle,” said Robert. “And London Stone were really helpful. When we changed our mind about the grout, we had Innocent Black on site the next day.” 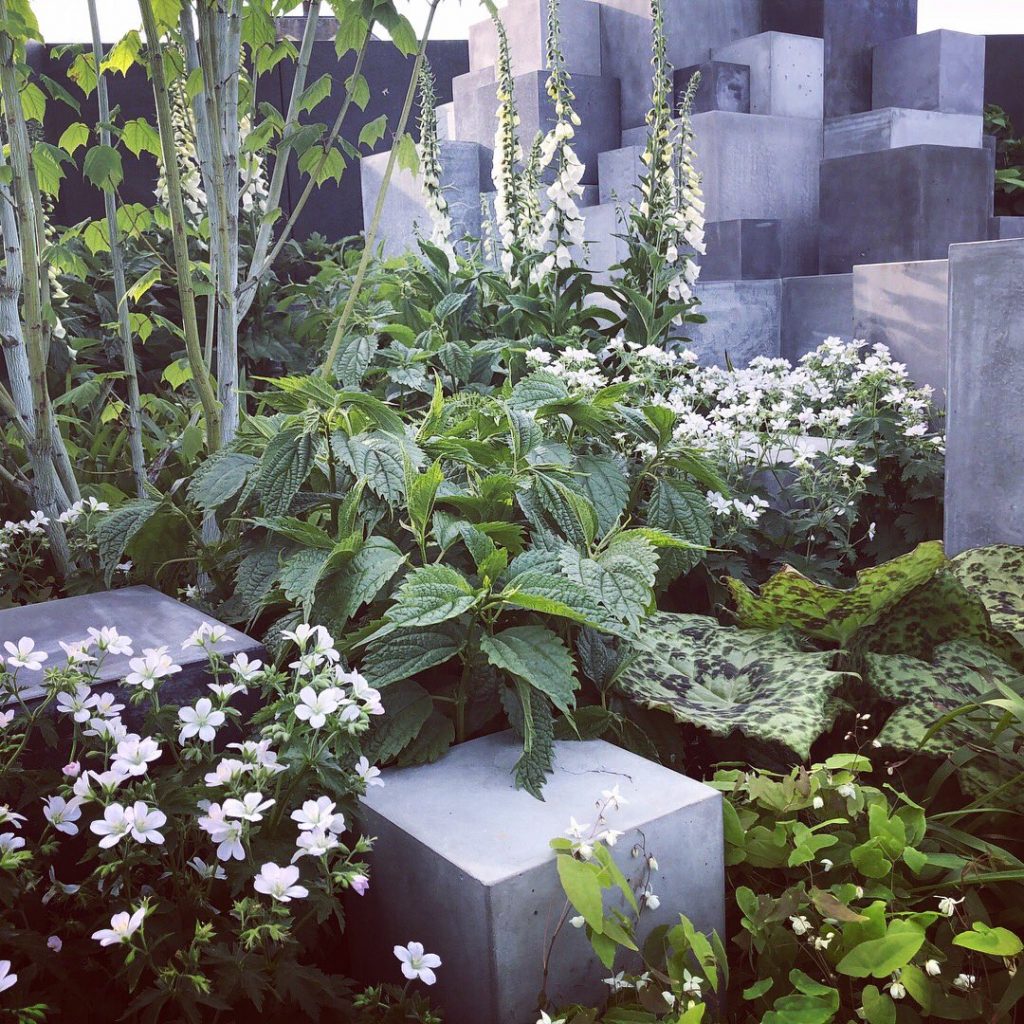 The planting is chosen with shady corners in mind. At the same time it shows the power of contrast. While the monolithic blocks, 600x600mm planting pockets and water features reinforce the basic grid on which the design rests, the planting flows through the beds, offering organic shapes, texture and movement.

Part of the remit of the ‘Space to Grow’ gardens is to offer ideas that the visitor can take away and use at home. “It’s also a showcase of the talent in the industry,” says Robert. “It’s important that the RHS is trying to get people to take elements home, but people should also be wowed.”

Sculpture, for Robert, is incredibly important. “You shouldn’t just buy something and plonk it down. It should be related to the house, the personality of owner in some way; it doesn’t have to be very expensive.” 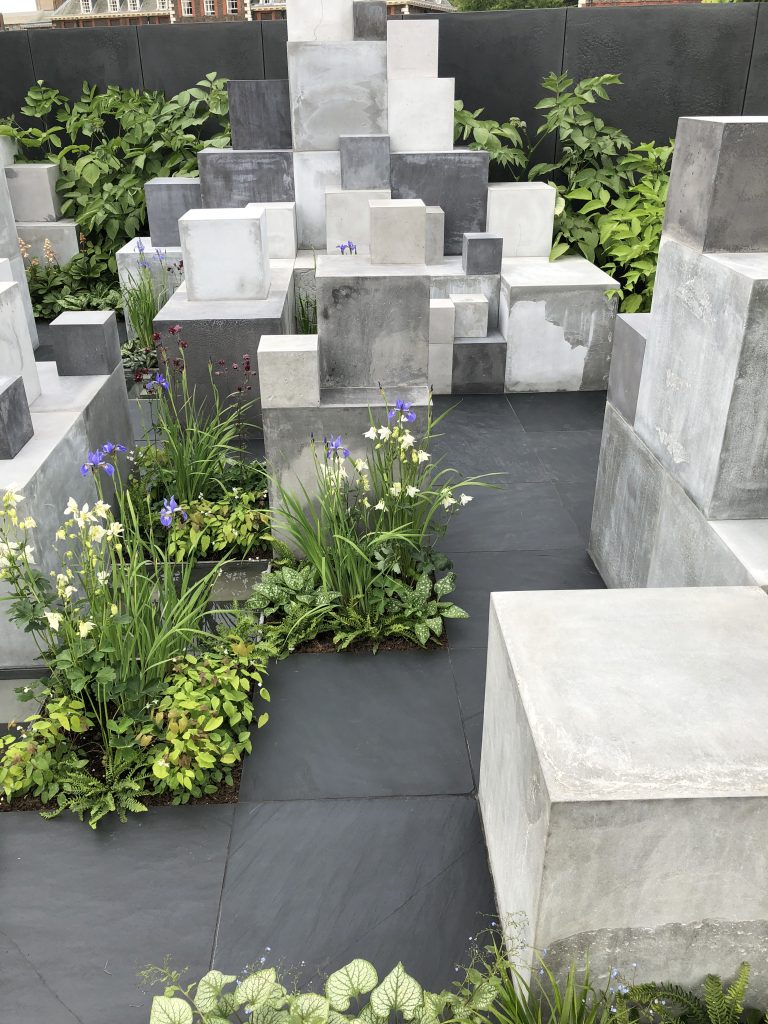 Although Skin Deep is Robert’s first Chelsea garden, it’s not his first time on a build at this world-leading garden show. In 2011, a year after his decision to take up garden design, he was part of Diarmuid Gavin’s team on the innovative Sky Garden.

“I was quite intimidated by him, but he was absolutely lovely and supportive. I had to have one day off to do an exam, and Diarmuid sat down and tested me on my notes. There were lots of people working on garden, but everyone felt like part of the team. He made sure that it wasn’t the same people making tea each day and there was a team meeting at the beginning of each day.”

Has he modelled this year’s build on what he learned then? “Of course.”

His methods certainly worked. He describes the experience of building Skin Deep as, “Really good. Relatively stress-free in a way. The hardest part was getting everything organised so it could go as smoothly as it could.”

So now, after offering our many congratulations to Robert on producing such a great garden, we’d like to urge him to get some sleep!