When you have a message you want the world to hear, it’s not a bad idea to put it up in where everyone can see it. 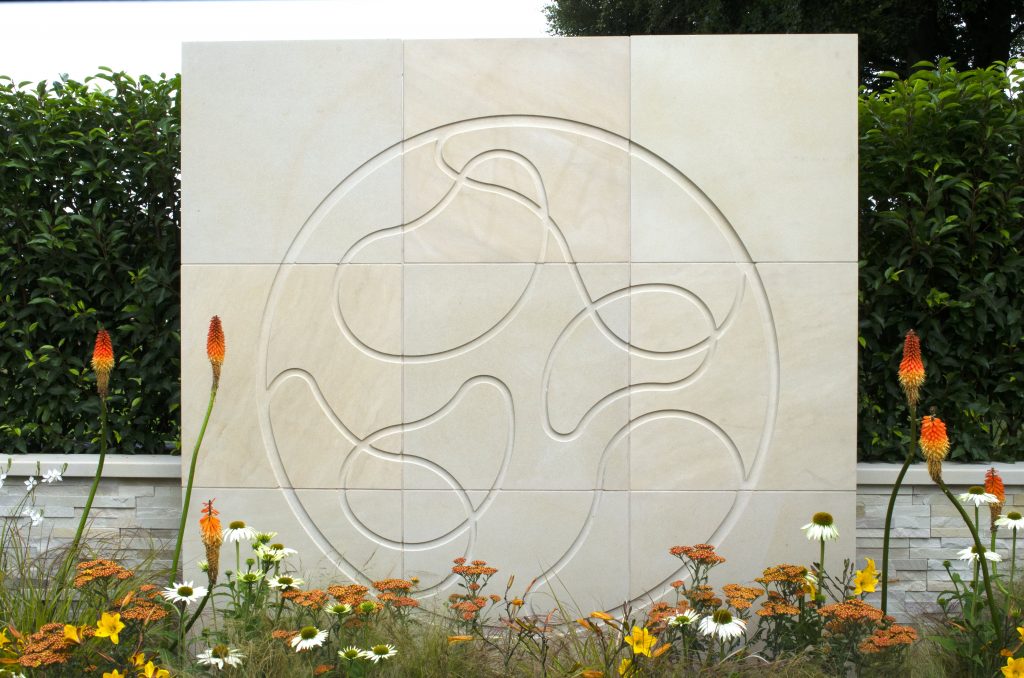 The bespoke piece in all it's glory. Kristian Reay, RHS Tatton Park 2019

Last month, we gave you a quick tour of Kristian Reay’s award-winning The Phytosanctuary Garden at RHS Tatton Park. It’s time to focus on one of its major elements —the engraved feature wall designed by Kristian to represent the Xylella fastidiosa bacterium.

You couldn’t miss it. However, it didn’t just offer an important message about the threat of the bacterium to some of our best-loved plants; it was also an artwork in itself, demanding the skills and know-how of our Design Project Manager Piotr Przytula.

First up was the initial discussion about the design. “We resolved all of it prior to going on site,” says Kristian. “Piotr was fantastic. I came down to the Bespoke Stone Centre and sat down with Steve and Piotr. I’d already done drawings. Piotr took it from that and cut all the pieces together.” 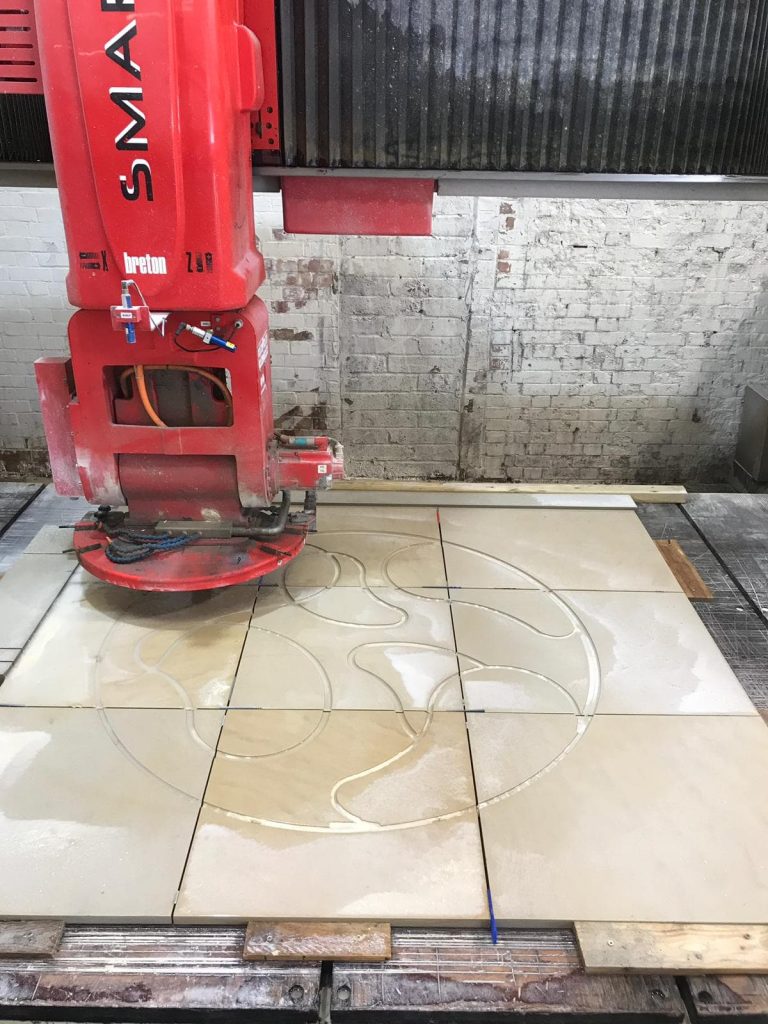 London Stone's CNC Machine doing what it does best

“It’s easier when the designer comes to the office,” says Piotr. “We have a cup of tea and everyone’s on the same page.”

A preliminary meeting gives us all a chance to discuss likely difficulties, suggest solutions and bounce ideas off each other. One change that arose from Kristian’s original design was the absorption of a strip of stone at the base of the wall into the bottom slabs, which simplifies the layout. Consequently, the feature wall was made up of six standard 600 x 600 paving pieces, above three 750 x 600 mm bespoke pieces at the base.

The choice of stone was important. The size of the wall, combined with the routing for the design, made a single piece of sandstone impracticable, while four large slabs would have had the joints crossing in the centre, creating a totally different feel. The solution, of nine slabs, actually enhances the scientific feel element as if putting the bacterium’s behaviour under a scientific grid. 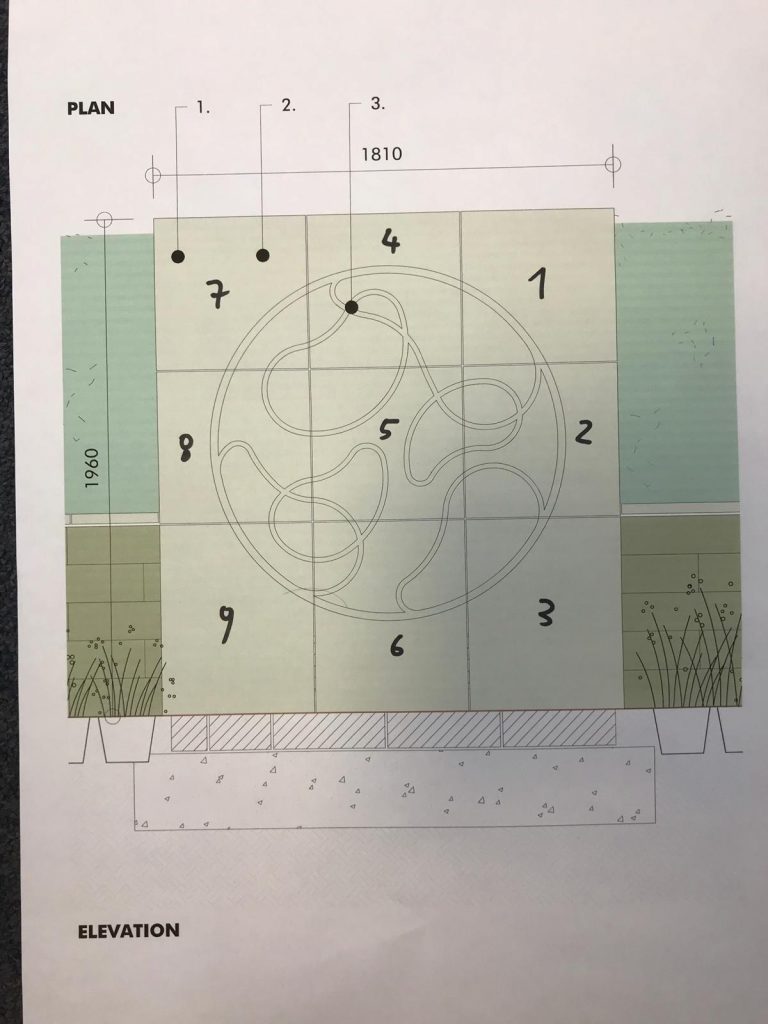 Kristian chose Harvest Sawn Sandstone for its beauty and because its soft, warm feel evokes the Mediterranean. “Harvest sandstone has colour variations,” says Piotr, “and we didn’t want it to look odd with one side brown and the other white and beige, so we had to find the right pieces and spent a lot of time selecting stones to create balanced, matching pieces.”

A decision also had to be made on the depth of the channel cut into the sandstone. “The sandstone is 25mm thick,” explains Piotr. “I preferred to cut as shallow as possible, but 3 mm was not enough.” Piotr sent samples to Kristian. “Seven mm was too deep,” he adds, “so we made it 5mm.”

The pattern was engraved on a CNC machine with a 15mm-wide router, the channel varying in widths from 20mm to 30mm. As Harvest sandstone is soft (when compared with harder materials such as a granite), only a single pass was necessary to carve out the 5mm deep channel, although Piotr made a second sweep to remove the mark left in the centre of the 30 mm widths by the edge of the router, ensuring the design had a smooth, clean flow. 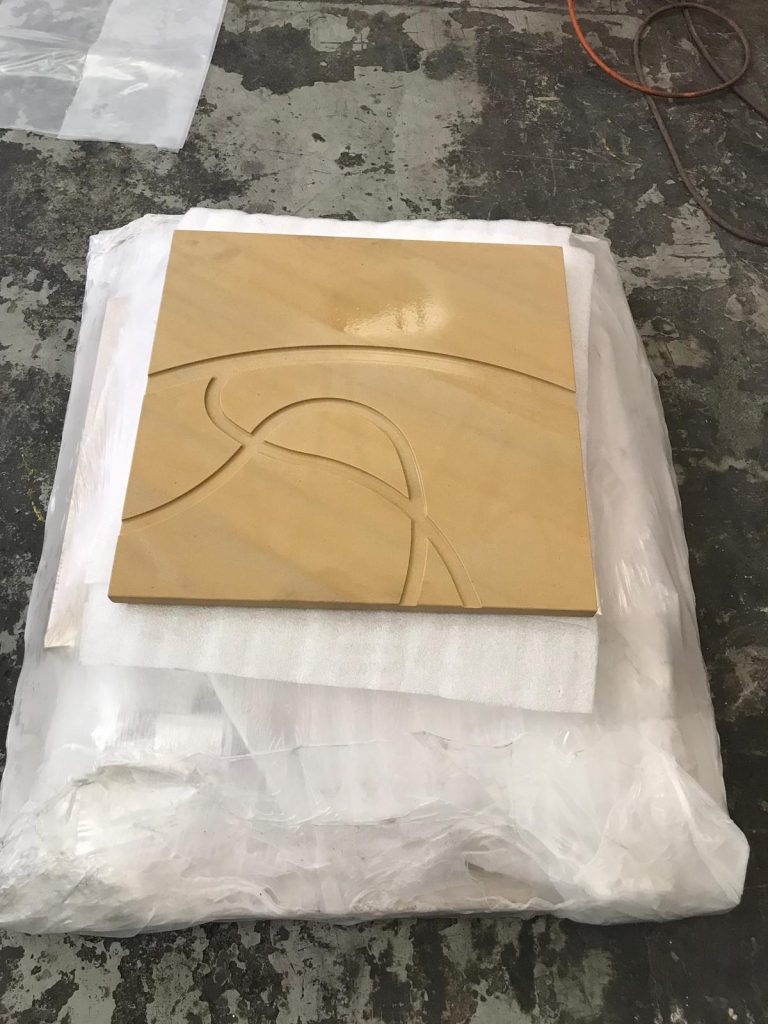 All the different natural stones have their characteristics which have to be anticipated and prepared for. Here, because of its speed and power, there was a danger of the tool chipping a corner of the stone as it left it. As a result, one piece of stone had to be recut. “That’s tricky,” says Piotr, “because to start we put all the slabs on the table and cut them in one go as the edges had to match up. Then we had to match in one piece by itself.” As you can see, though, the result was perfect.

Of course, producing a bespoke piece is pointless if we don’t get it to its destination safely. “London Stone delivered to site,” says Kristian, “and it all went to plan.” As he said in our previous blogpost, things seemed to just arrive on site and slot into position. 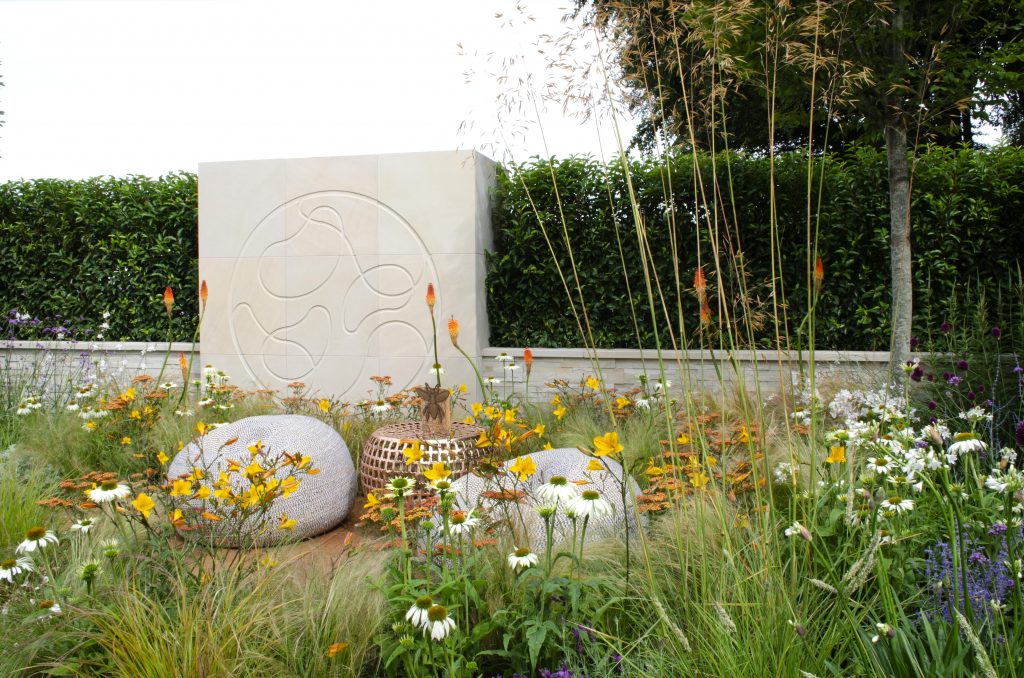 Kristian's The Phytosanctuary Garden won a gold medal, and bagged Kristian the Young Designer Of The Year for 2019

That’s exactly what you need when time is short and the pressure’s on. The result, a stunning wall feature that enhanced the garden while making an important statement in its own right, helped gain Kristian the coveted title of Young Designer 2019.

If you’d like more information on how our Bespoke Stone Centre can add a special and unique element to your garden design, contact us on for details.