Mindful Of Detail At RHS Chatsworth 2019

With RHS Chatsworth in its third year this year and the inherently mindful qualities of gardening increasingly recognised, a new category at the show, the Mindfulness Gardens, concentrated on how gardens can contribute to well-being and mental health. 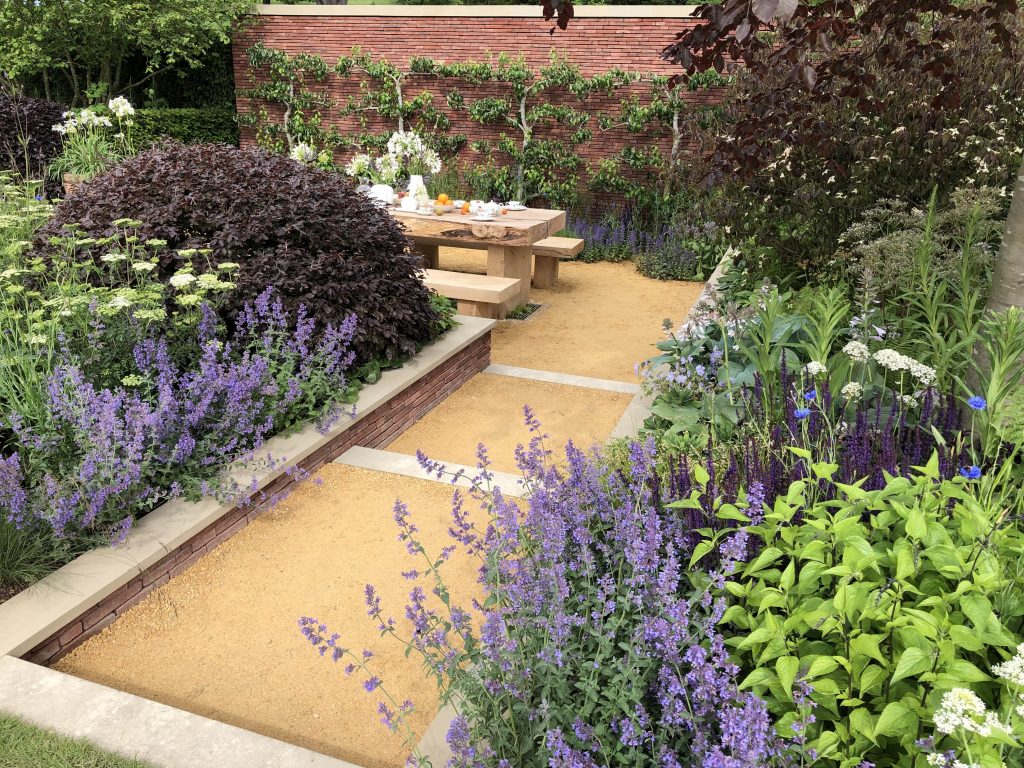 The Thrive Reflective Mind Garden, designed by Richard Rogers and built by Xardin Garden Design, focused the attention around a serene 1.8m high bronze face created by Simon Gudgeon. Reflected in the water of the pond, it represented our ability to reflect on our own thoughts and feelings. Featuring strongly was our DesignClad Steel Dark, used to face the raised beds and the walls that alternated with beech hedging along the boundaries.

DesignClad was supplied in bespoke-sized sheets and their large format contributed to the monolithic feel of the walls, as well as providing a strong, supportive background for the planting. 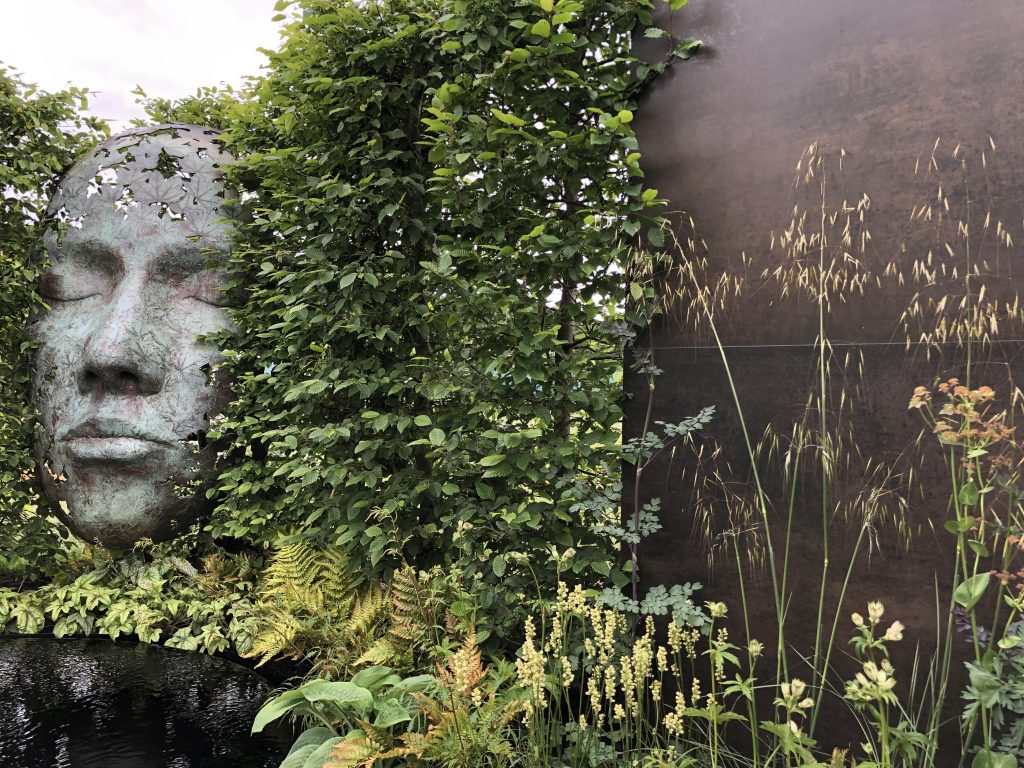 What particularly struck us was the way Richard combined this very modern material with the much more traditional look of riven stone. This is something that designers often shy away from, but he’s shown how well blending the two can work. The brown tones in Raj Green Sandstone Steps and Setts picked up the rusted colouring of the DesignClad, while the riven surface and rock-faced leading edges of the steps complemented the distressed appearance of the “steel” elements. Winning a Silver Gilt, Richard’s design provides plenty of inspiration for small spaces. 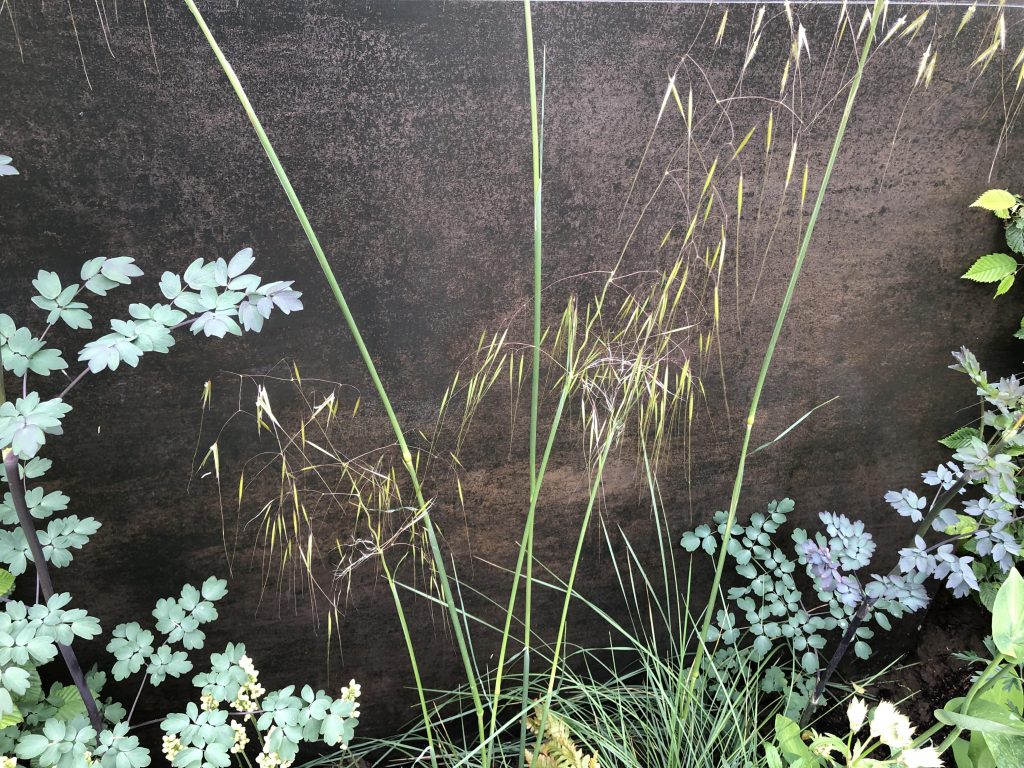 Part of the brief of the Mindfulness Gardens was to design a garden that showed what mindfulness meant to the designer. It was a subject that immediately appealed to Rae Wilkinson, who entered the Space Within garden, which was built by G K Wilson Landscape Services.

In April she told the Sod Show podcast, “I wanted to create a meditation space as a garden, because I’ve done some meditation outside, I’ve done some forest bathing meditation and it’s been so powerful. This is a really good message and a good subject matter…I put the design together in a sort of rush of creativity.”

It’s a rush that won not only Gold but Best Mindfulness Garden. Rae put the meditational space in the centre of the garden, delineating it by creating a plinth of DesignBoard Luna on which to put the organically shaped pebble benches by sculptor Ben Barrell. 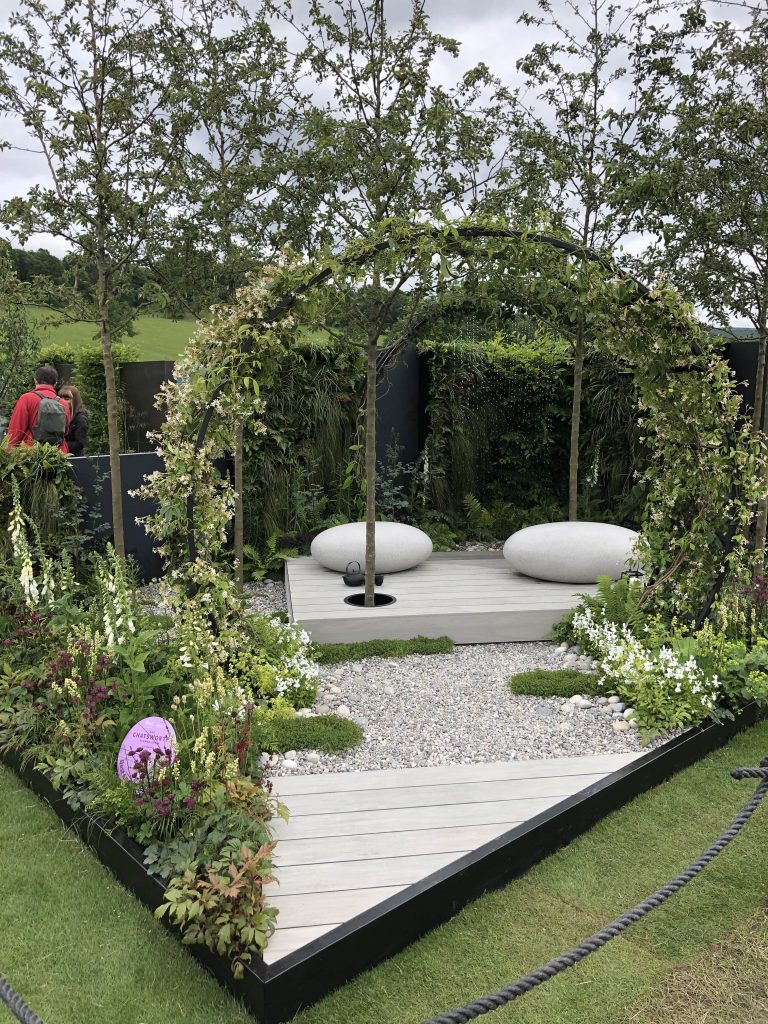 Luna is one of our most popular composite decking colours and it blended perfectly with the chosen gravel and Ben’s benches, adding to the natural feel of the design.

It also showed how composite decking can be used to create an illusion of space as the direction of lay across the garden increased the feeling of width within the tiny 6 x 4 m area. In combination with the strong lines of the moon gates and lines of planting within the gravel, this slowed the progression of the gaze to back of the garden.

To put the icing on the cake, Rae also won People’s Choice in the Mindfulness category. 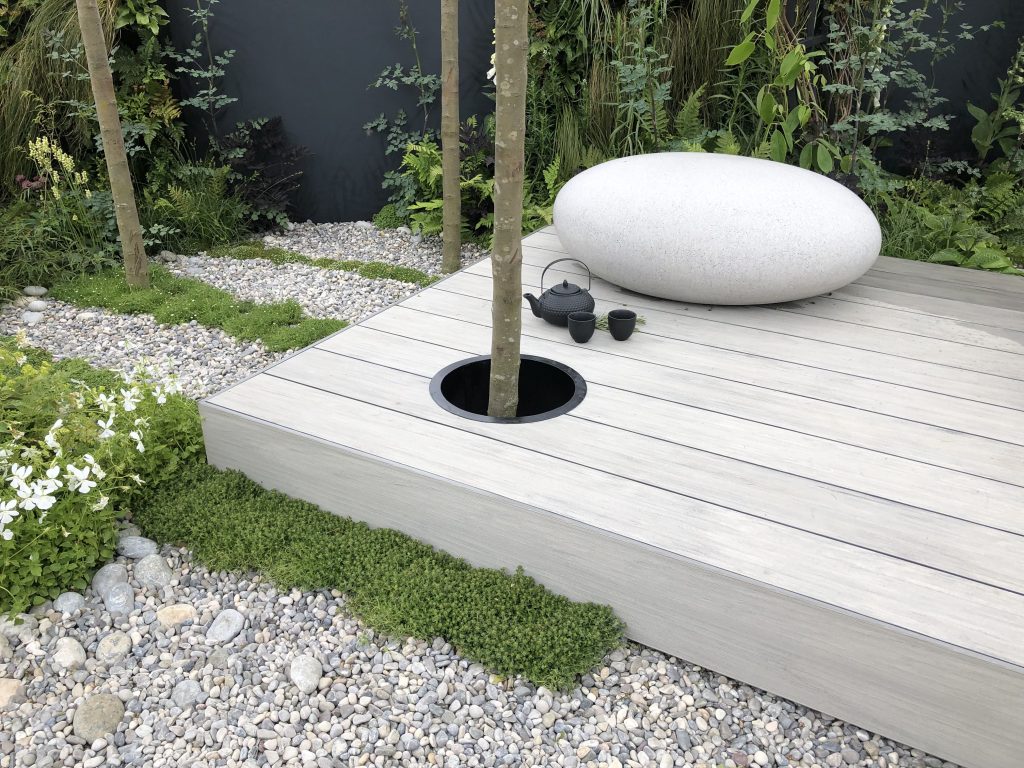 DesignBoard Luna helps to add a sense of serenity and calmness, along with a thoughtful mix of materials

Meanwhile, over the Show Gardens, The Wedgwood Garden designed by Jamie Butterworth and built by Keyscape Gardens managed to go a step further with a tour de force that is the first garden in any RHS show to gain, not only a Gold, Best Show Garden and People’s Choice but also Best Construction!

Britannia Buff Yorkstone, used as steps and copings, is a premium product. Its tight grain and even texture always give a luxury look, which was a nice touch for a garden sponsored by a company known for its high-quality wares. 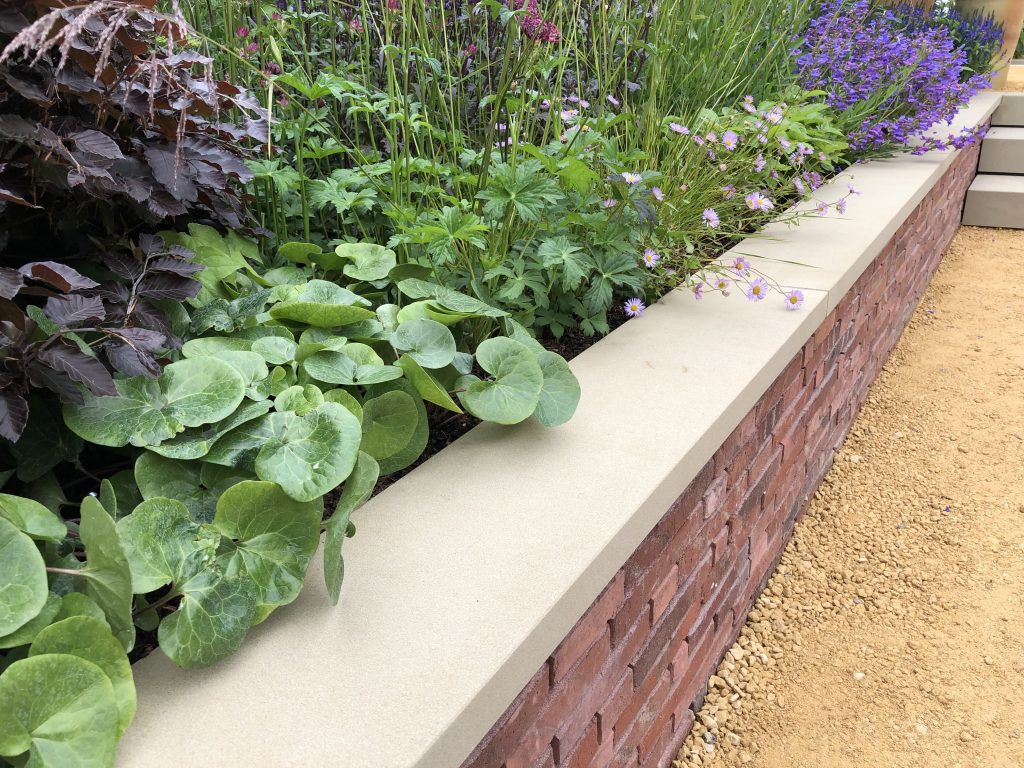 One of the stand-out details of the design was the steel bridge, set into the Yorkstone. “This was a tricky one,” says Project Design Manager Piotr who, you might have noticed from our recent posts, has been extremely busy with bespoke elements for recent show gardens. What is so seldom recognised by the casual onlooker is how a simple-looking detail such as this bridge need a huge amount of thought, planning, trialling and readjustment before reaching the stunning end result you see pictured.

The research and development is only part of the whole process; you also have to keep an eye on the point when the job leaves the workshop and becomes someone else’s responsibility. “It’s difficult to imagine the best way fit something, especially when someone else will be doing the fitting.”

This is where constant dialogue is important. “There was good contact between me, Jamie and Rupert Keys,” says Piotr. “We set up a WhatsApp group which showed all our messages to each other.” 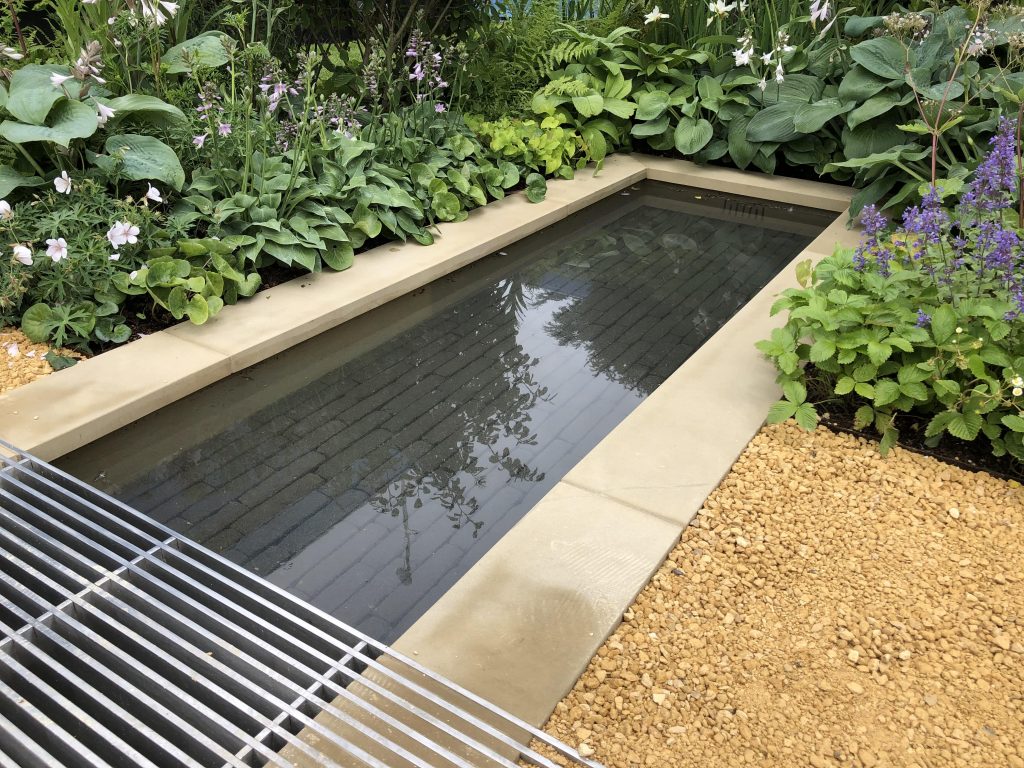 'The' steel bridge over Jamie's water feature on The Wedgwood Garden, RHS Chatsworth 2019

The metalwork was fitted into the stone on site. “I explained to Rupert that the best way would be to fit the stone into the bridge with silicone.” The bridge and stone were put together and dropped into place. It took seven people to lift it into position!

“It was a great job,” adds Piotr. “The first time you do something it’s not simple and you learn from experience. The second time is quicker. This took longer than planned and it was a bit of struggle but the result is excellent. It’s great to be part of it.”

The bridge was only one detail, though it must surely have added in a bit of weight for that Construction award. Britannia Buff was also used to cope the retaining walls, for the bench, and steps around the garden. The steps, where you need something that will stand up to footfall, had a pencil-round profile but around the pond the extra crisp edges were achieved by having the arris removed - something that wouldn’t have been advisable without the bridge. 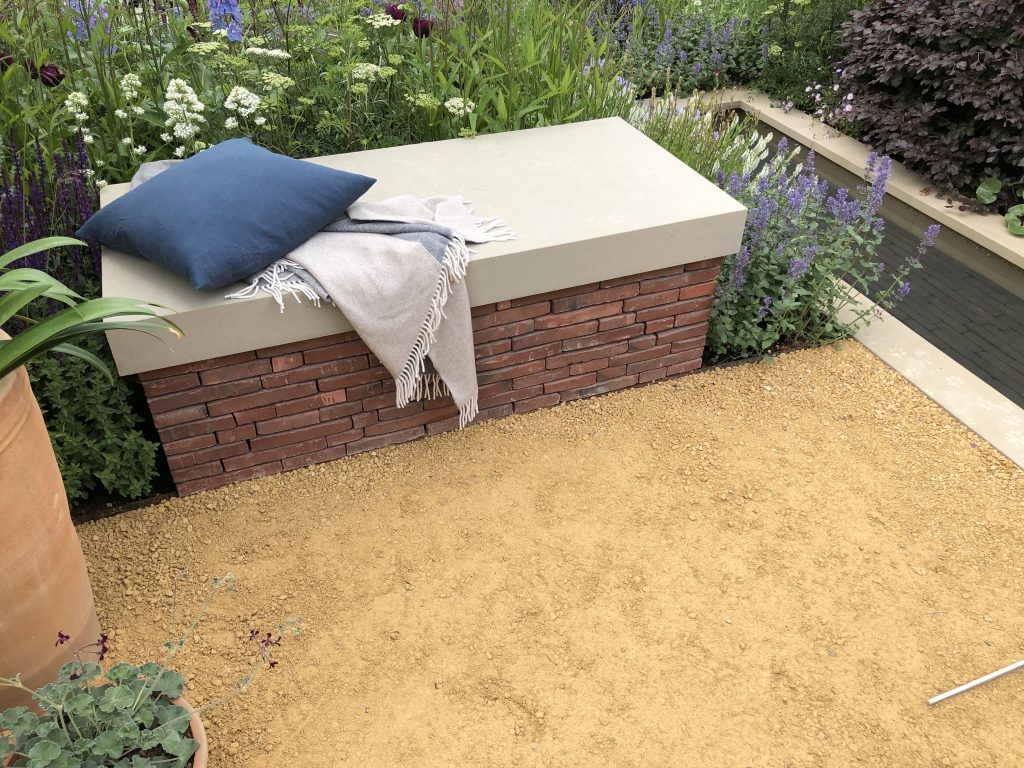 In this, Wedgwood’s 260th anniversary year, Jamie was inspired by Josiah Wedgwood's son, John, who was a founding member of the RHS and wanted to use the power of plants to unite people. Jamie certainly united opinion with his design, and we’re delighted that it is being moved to the Wedgwood Estate to join past show gardens, including Jo Thompson’s from last year’s Chelsea Flower Show.

Many congratulations to all the designers and contractors involved in this year’s RHS Chatsworth. If you’d like any more information on any of the products used, then don’t hesitate to contact us.