RHS Malvern Spring Festival opened today and, for the second year, Jamie Butterworth’s initiative, Green Living Spaces, will be giving ideas on how to create a garden retreat in a small space. 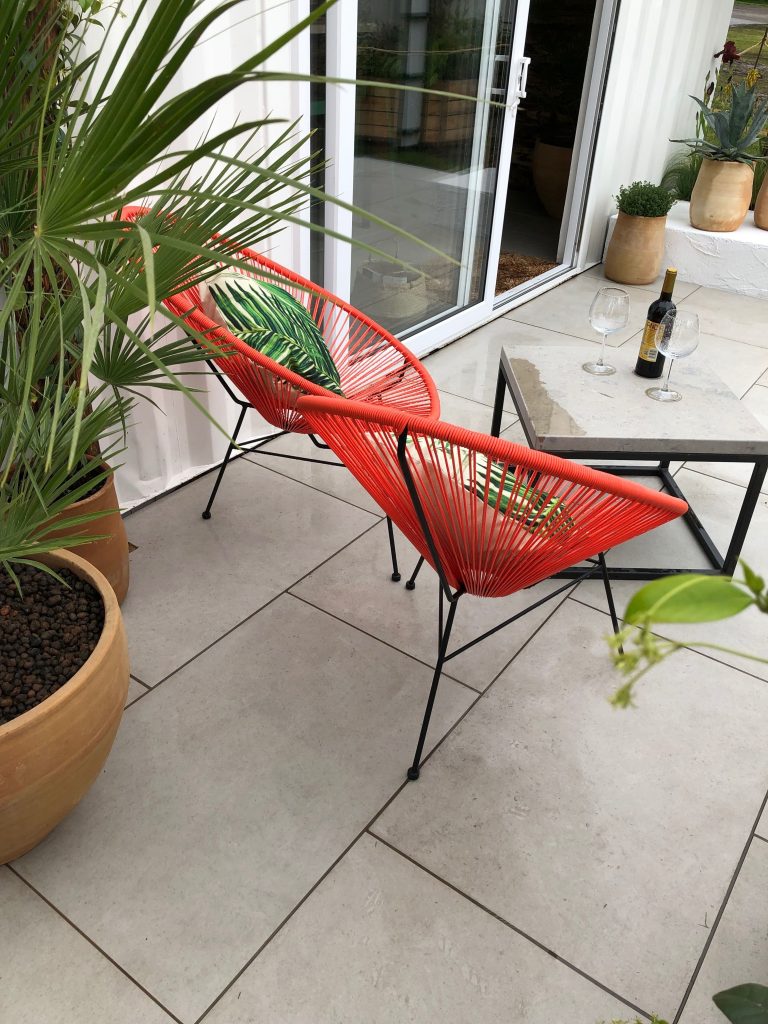 Gaby's created a stunning contemporary feel with her clever design

One of the four designers in the category, Gabriella Pill has designed her very first show garden, having graduated from KLC only last year. “It’s been very stressful!” she says. “Now it’s all over I can enjoy the build-up, if you see what I mean, but not while it was happening!”

Her interpretation, Mediterranean Terrace, is focused on inspiring ‘Generation Rent’ and those who are buying a house for the first time, something she very much relates to as she’s trying to do that herself: “I want people to come and say, Oh, I could do that.” 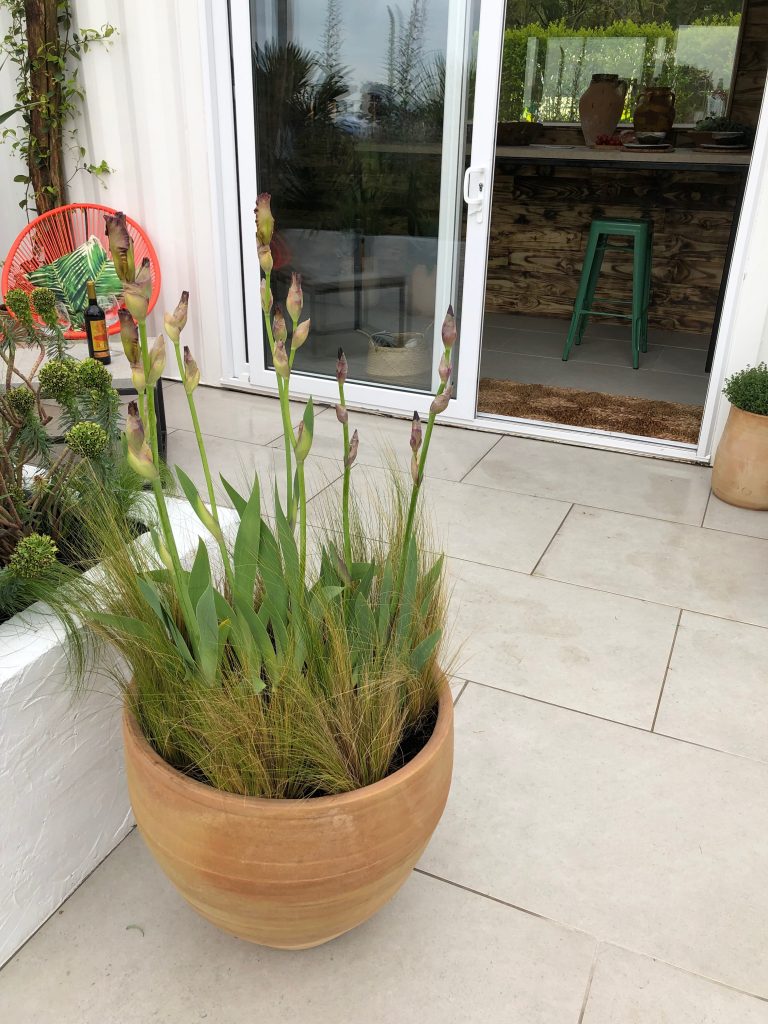 Gaby knew she wanted Porcelain paving. “You know when you’re on holiday and barefoot?” she explains, “This is synonymous with being in the Mediterranean.” It’s also an excellent material for linking indoors and out. “I wanted to bring the outside in, making the garden an extra room and using the same paving was essential to that.”

Gaby chose Florence Grey Porcelain which has a limestone effect. “It’s contemporary and bright and the texture was important. I wanted to lift and lighten. And I’ve got a nice contrast - the contemporary, crisp paving with a wibbly-wobbly pergola. Looks brilliant.” It also makes a lovely foil for potted plants, cushions and rugs which are repeated indoors and out to unify the two spaces. 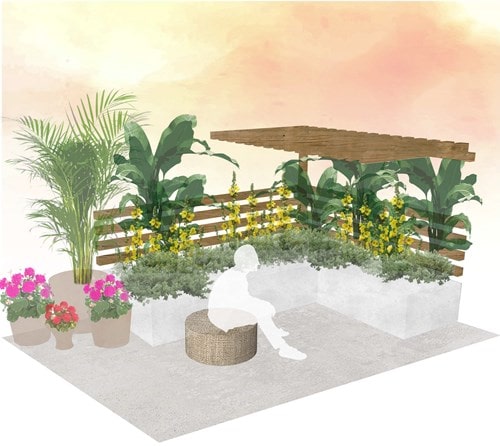 Gaby's original drawing has developed a lot since it's conception

The Porcelain is paired with Jura Grey Limestone for the bar tables. “London Stone were really helpful. I told them what I wanted in Florence Grey and it was done. There was no to-ing and fro-ing.”

There was one hiccup, though. The design was calculated on the original dimensions given to designers for the gardens but, as these were later reduced, when Gaby got the bar table for the interior to the site, it looked far too big. “It’s a beautiful bar table, but the legs were too high, so they angle-grinded the legs down and did a touch-up on the paint, and it looks stunning. The guys were really helpful.”

The table is a good reminder of how simple stone can really make a design. “I looked at having a wooden trestle table, but it might have got a bit lost. I’ve put lots of antique posts on it and it looks incredible. It made my job easier, because I’m not an interior designer, I’m a garden designer. This made it a feature and it does all the talking.” The indoor bar table is echoed in a smaller matching one outdoors. 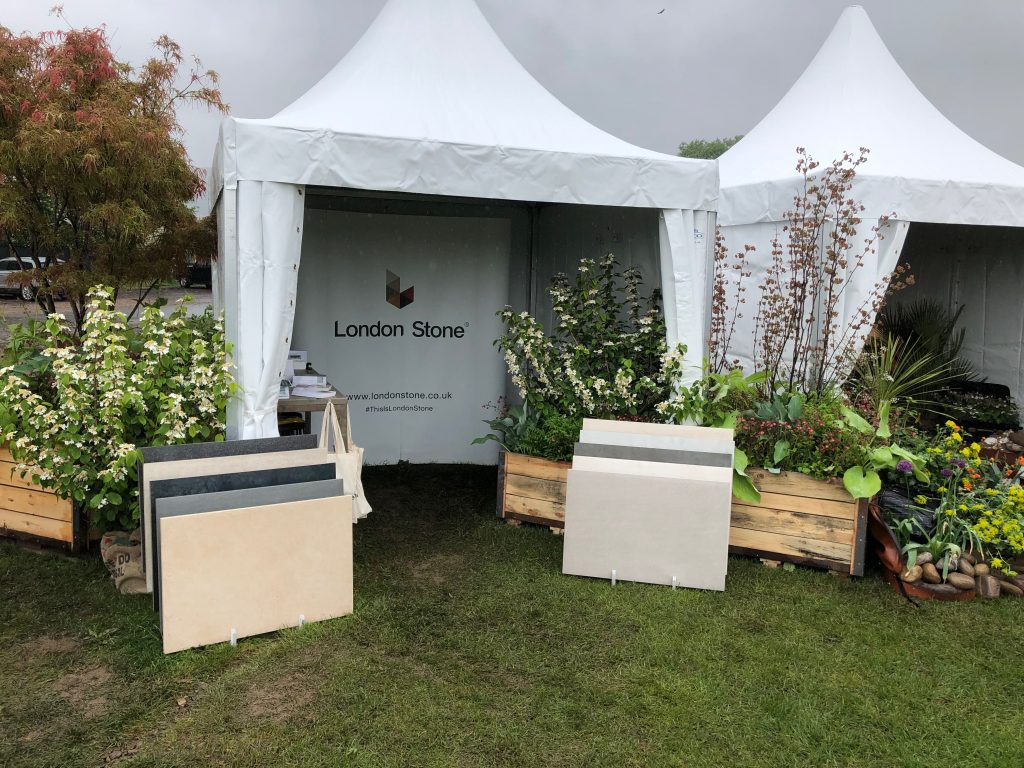 Gaby recently joined Butterworth Horticulture and is based on the first floor of our Surrey Showroom in Farnham, so perhaps we’re a bit biased, but we think she’s produced a stunning design that certainly deserves every bit of the Silver-Gilt awarded - quite the achievement for a designer who only graduated last year!

But don’t miss out on the other gardens in the Green Living Spaces category for ideas for small gardens. “I’ve been round all the gardens,” says Gaby, “and the category is really strong this year; everyone’s done really well. Keyscapes have done a brilliant job building and mentoring us all.’

London Stone have a stand at the show, right next to Gaby’s garden, so do visit if you’re at the show.