This entry was posted in Ethics in Stone and tagged Child Labour Free Zones, Ethics in Natural Stone, NoChildLeftBehind on 22nd August 2017 by London Stone Blog.

So what about the roles that local people, from the community, play in the project? There is a perception that people living in the project areas are all victims.  Of course some will be victims, some will be much worse off than others but there are groups of people from the community who are at the front, driving this project forward, inspiring others, even if it’s just taking part with an open heart and mind.  Whatever their involvement, it is the local people who are making things happen here in Budhpura, we’re going to take a look at some of the stand out people, you could call them the unsung heroes.  I’ve met quite a few of them during my two recent visits to Budhpura.  Their stories are impressive and anyone looking for hope and inspiration should keep on reading, you’ll find it aplenty here.  During my recent visit to Budhpura I took a day out to spend some time in the local community, I wanted to get a feel for how the community were engaging with the project.  It turned out to be a remarkable day and as I visited homes, work sites and community areas it became obvious that certain people were fully engaged and playing leading roles in the project. 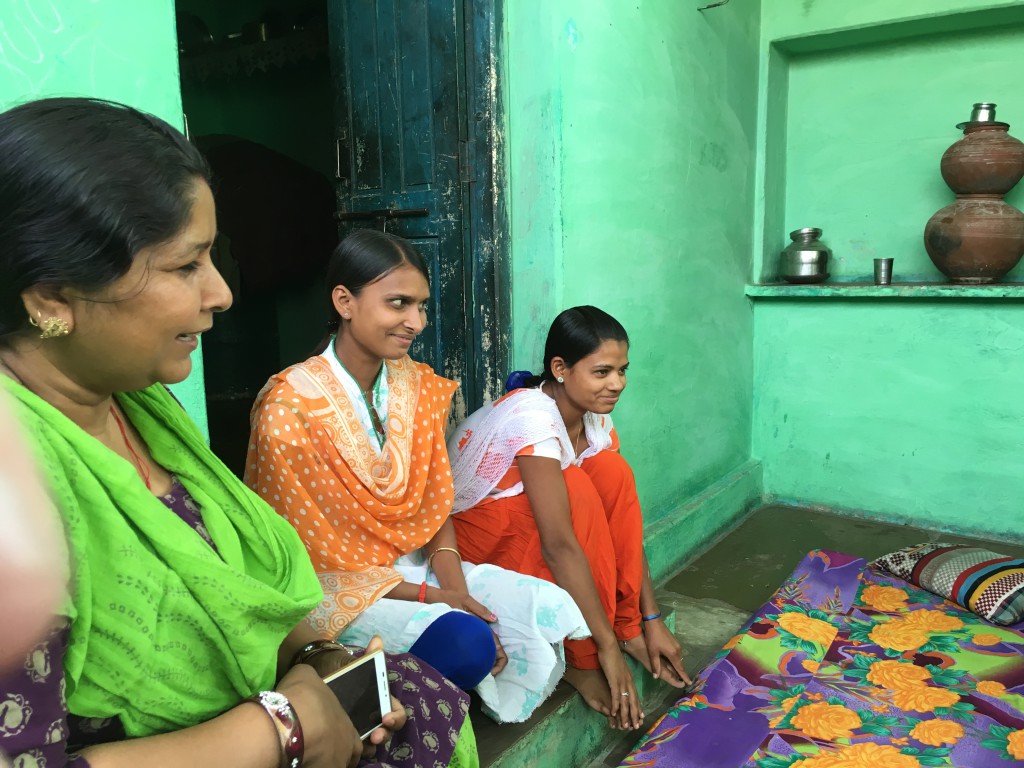 Urmila now has a brighter future

The first meeting of the day was with a group of teenage girls who were at the Manjari community centre.  The girls were aged between 17-20 and in the past had all worked in the production of Sandstone setts (Many of the girls had lost their fingerprints due to long hours of manual labour and as a result of this were ineligible to receive state benefits, this is just one example of the many unseen and invisible consequences of child labour).   Things were different now though, Manjari were providing these girls with tailoring training, giving them a useful skill that they could use to earn money.  Ok it was not going to change their lives immediately, most of these girls would still be involved in sett production at home after school hours, but they now have a skill that they can develop that doesn’t revolve solely around the stone industry.  I spent an hour with the girls and their optimism and positivity was contagious, it was so enthusing to see first hand how the work that Manjari were doing was positively impacting on people's lives.  I wanted to learn more! 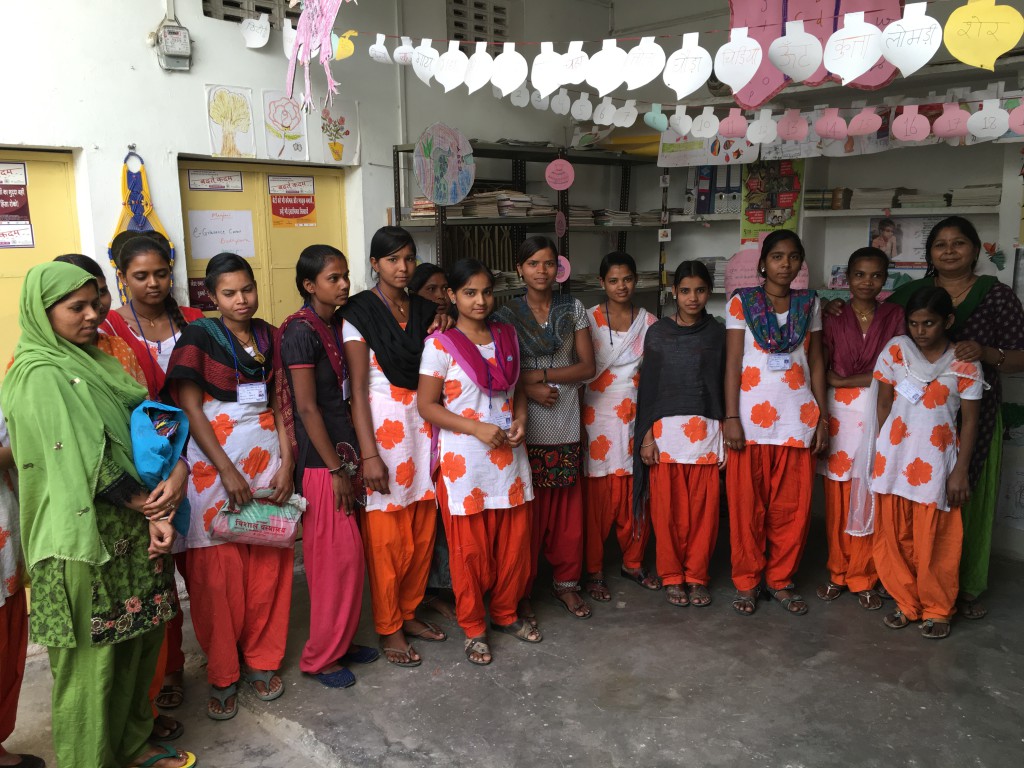 The girls enrolled in the tailoring course

The next part wasn’t planned but one of the girls asked, probably as more of a joke than anything else, if I would like to visit her house as she was sure that her mum would love to meet me.  I didn’t hesitate and said straightaway that it would be a privilege, what followed was a truly educational afternoon as I was given a local’s tour of Budhpura village and some of the surrounding areas.  A quick digression first though to talk about someone from Budhpura who, from day one, had stood out to me (and everyone else) as a person who had given more than most, to ensure the success of this project.  Bharulal was 15 years old and worked as a shop keeper at his family store.  Bharulal was so enthused by the Child labour Free Zones project that he actually closed down his family shop for three months and went door to door cajoling, encouraging and educating families on the importance of getting their children enrolled into education.  Bharulal is a local hero in Budhpura and he became my chaperone for the day as I was given a guided tour of the CLFZ project zone.  During the day we visited lots of houses, work sites and even a small migrant settlement.  Wherever we went, Bharulal was recognised, welcomed and treated with the upmost respect.  It was clear how important Bharulal was to the local community, this was a man who had endured personal hardship to help the project and support his community.  Thanks Bharulal, you’re an inspiration to all of us! 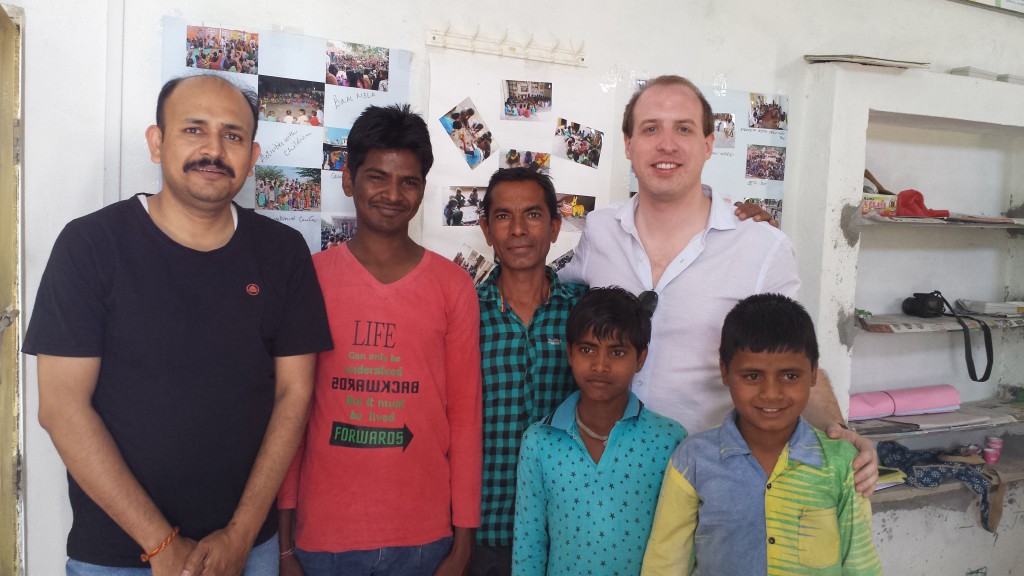 Bharulal posing in his ever optimistic red T-shirt: "Life can only be understood backwards but must be lived FORWARDS"

We first went to Urmila’s house.  Urmila was one of the girls I had met this morning and was enrolled in the Manjari tailoring course.  Urmila had worked in the stone industry from a young age and tragically contracted the lung disease, Silicosis.  Silicosis has no cure but if Urmila had continue to work in the stone industry, her condition would have deteriorated rapidly.  Through the tailoring course, Manjari have given Urmila a career option and hope for a better and brighter future. 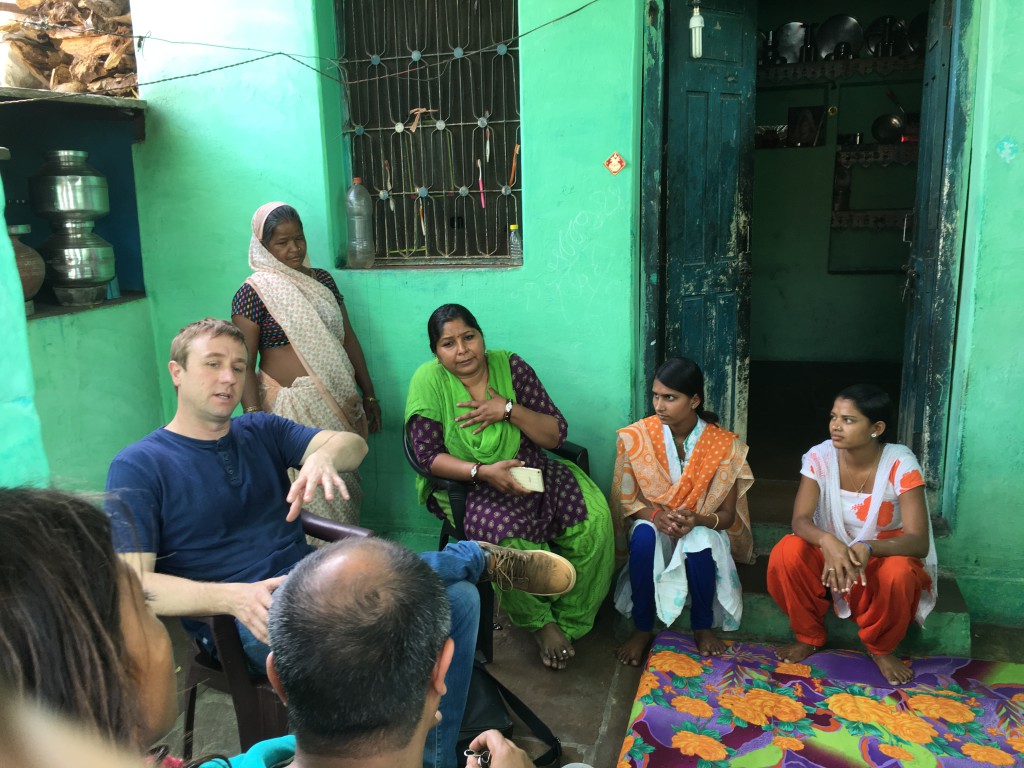 Our next stop was a large production site just outside the village.  I was told that this was communal land, anyone was free to use it.  I saw various piles of waste stone ready to be worked into finished setts along with piles of finished setts waiting to be collected and delivered to any of the various sett yards located in and around Budhpura.  I found it quite difficult to comprehend, this was a public space where anyone was free to work and this was just one place.  How many more places like this were there scattered across Budhpura and Rajasthan?  It was this type of work site that would present a significant challenge to the project team. 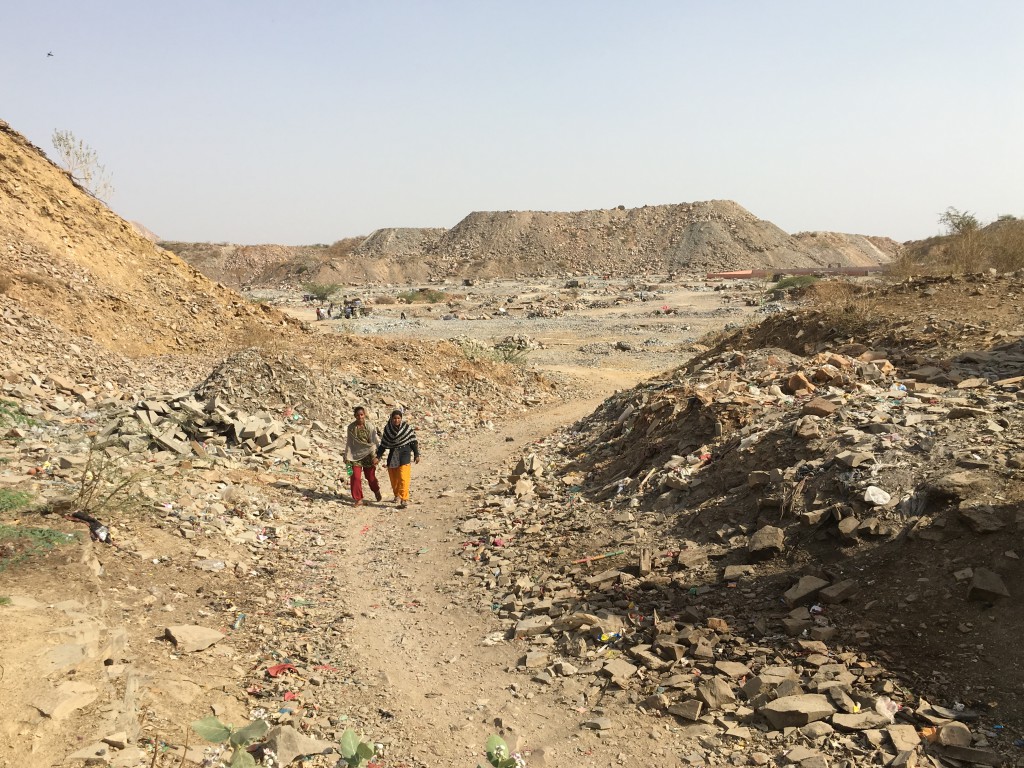 Looking out across the quarries I noticed a small settlement on top of a hill.  It was so far from the beaten track that I was intrigued to see what was there.  Me and Bharulal started to make our way over there.  You would have been forgiven for thinking that this was exactly the type of place that would fall through the cracks, get missed…….but no, as soon as we arrived there Bharulal was warmly greeted and I was shown the yellow marks on the house that indicated the house had been included in the base line survey and was a part of the project intervention zone.  Don’t get me wrong, I’m not saying conditions were rosy and, compared to the standards we are used to in the West, conditions were grim but the people here had definitely not been forgotten 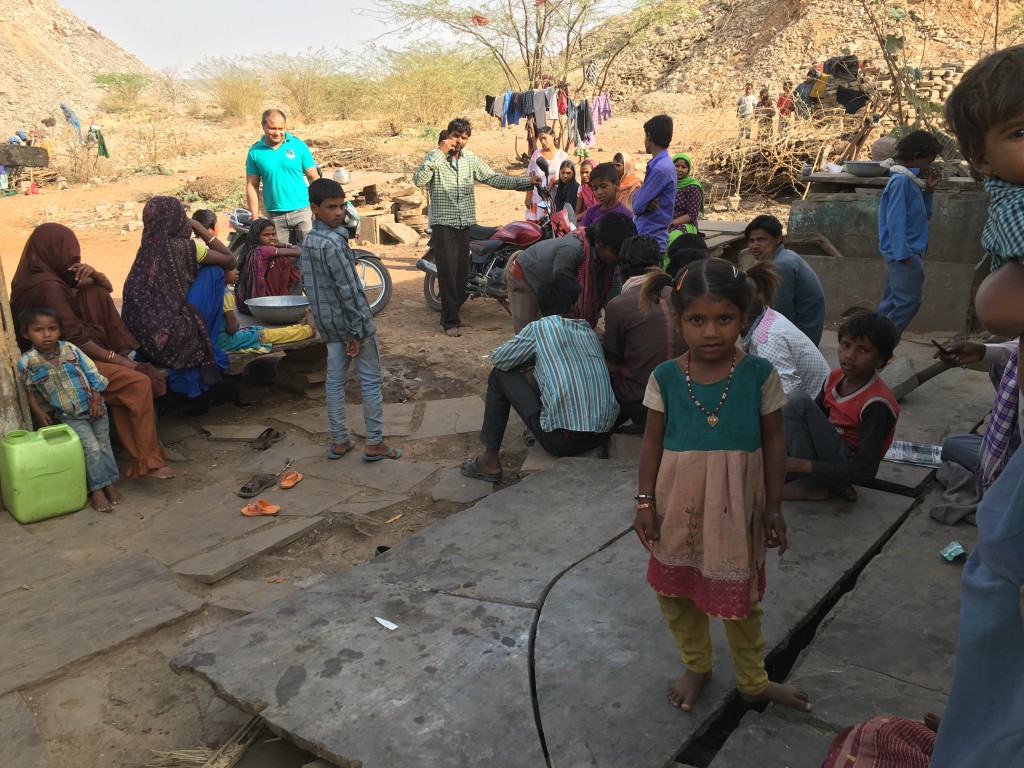 Migrant families on the Budhpura outskirts 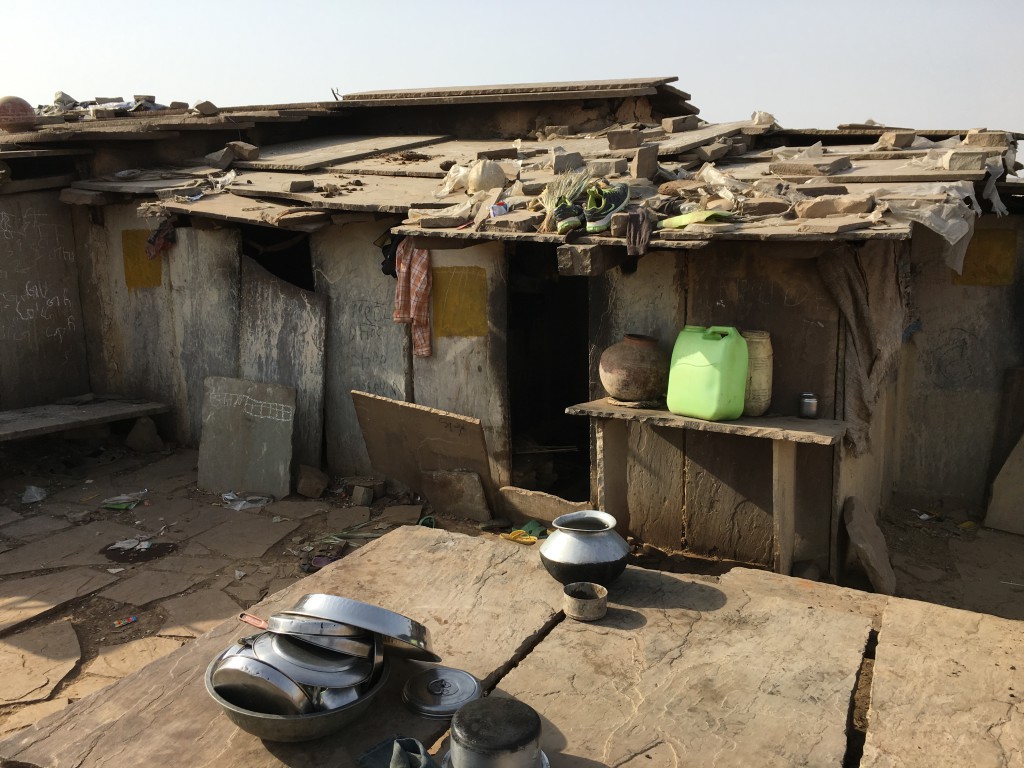 The rest of the day followed a similar pattern as we wound our way through the rabbit warren streets of Budhpura, stopping at house after house, talking to people and getting a feel for what life was like in a remote village like Budhpura.  It was educational, eye opening and I came away realising just how fortunate I was to have led such a privileged life.  This was the second day of my trip.  The first had been spent full of optimism about the great work we were doing here.  Its fair to say that at the end of this second day I had come back down to earth with a slight bump.  Yes, we are doing great work here but there was so much more to be done and a project like this can only be properly judged in 5 -10 years time. 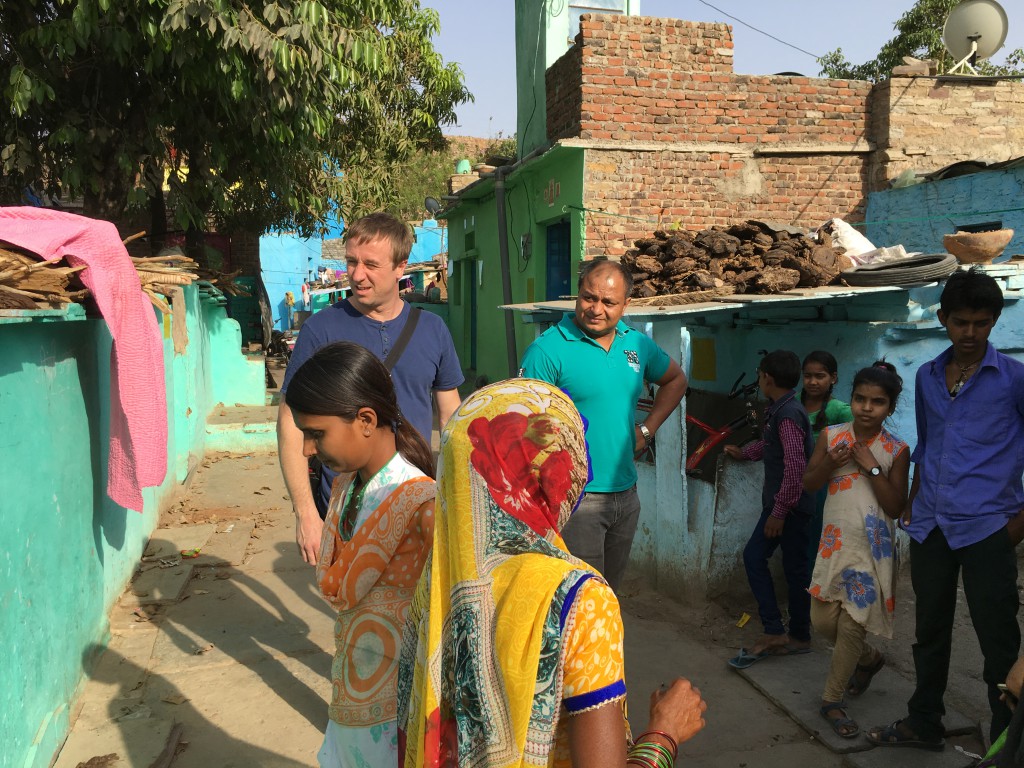 On walk about in the Rabbit warren alleys of Budhpura

One thing is for certain.  Forget about the Western Corporates and the NGO’s, the role we play is miniscule.  Its people like Bharulal and Urmila who will play the major role in eradicating child labour in Budhpura, certainly without these local unsung heroes any kind of sustainable progress is impossible