Ask our director Gavin Walley about his latest adventure, and you might be surprised at the level of detail that he comes back with. But when you’ve faced the possibility of plunging into a bottomless crevasse, saved (or possibly not) only by three team-mates digging their heels in against the pull of the rope attached to your harness, it tends to sharpen the mind. 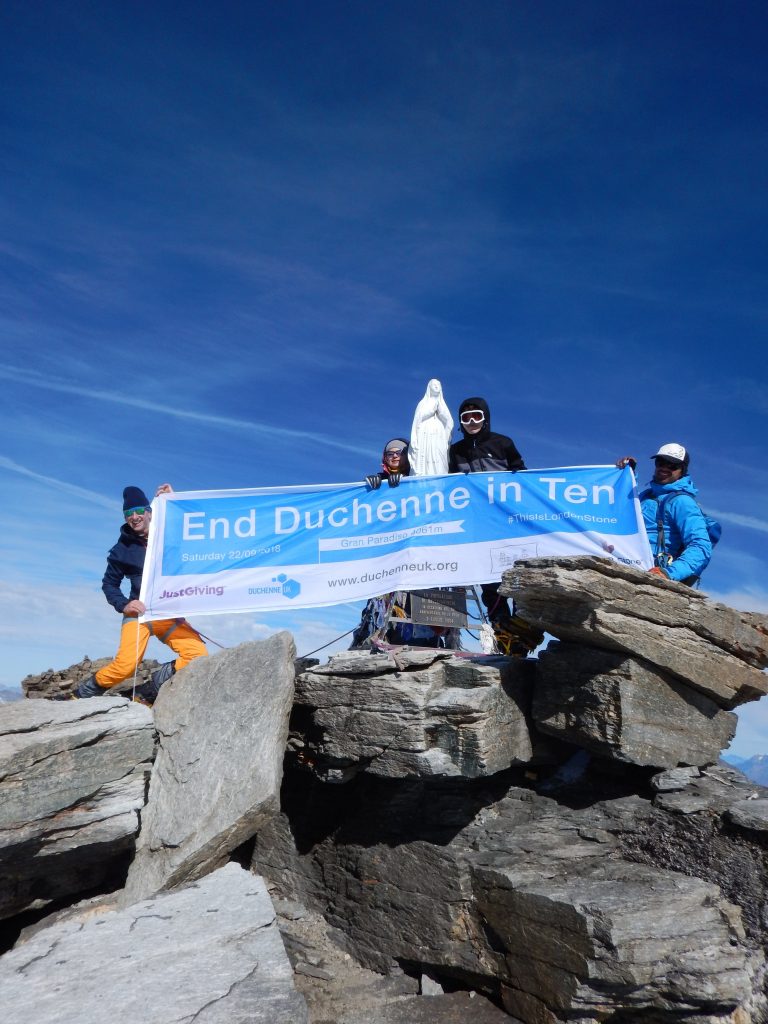 One of the climb teams reach the summit of Gran Paradiso - at over 4,000m above sea level. Gavin Walley's orange trousers were optional.

If you’ve followed our recent social media, you’ll know that a team of London Stone colleagues and friends made a flying visit last month to Italy, to conquer Gran Paradiso in support of Team Felix, the charity dedicated to raising money to help end Duchenne Muscular Dystrophy.

“It was a bit of an in-and-out job,” said Gavin, describing how after a weekly training programme of eight walks in the Surrey Hills, the team was out and back in three days.

But Surrey is nothing like this! After flying out at 6 a.m. on the Friday, they had already climbed to 2,900m by evening over stony paths and rubble. “We’d all been issued with climbing gear - harnesses, ice-pick, crampons. None of us had done anything this extreme.” 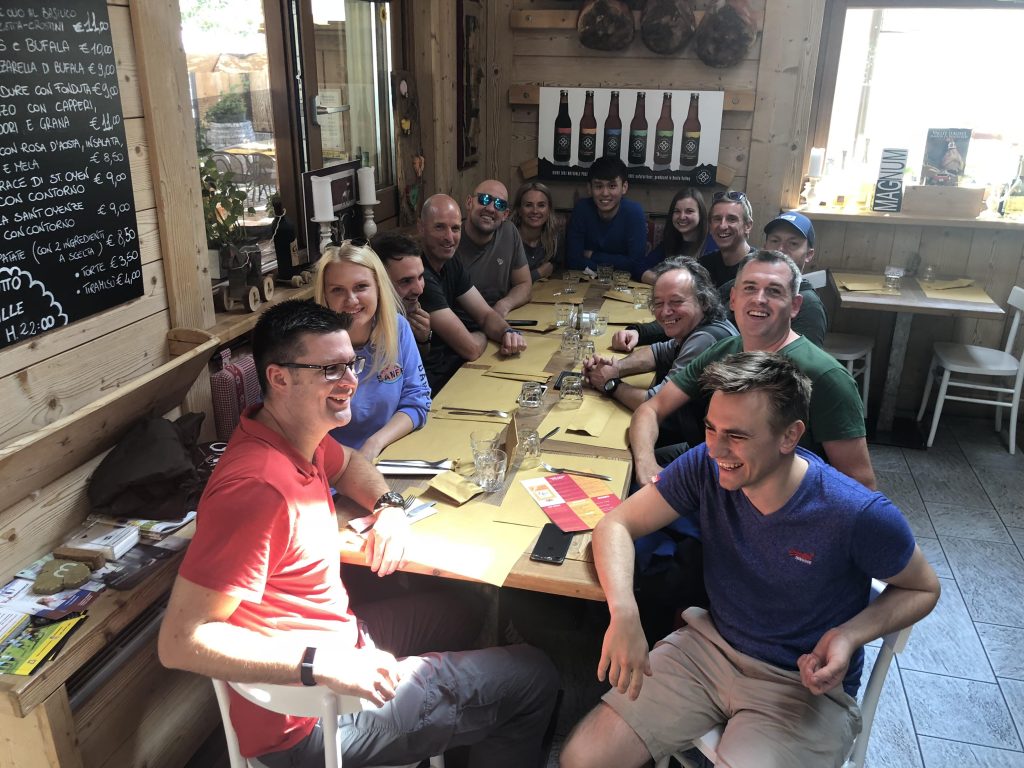 The team of intrepid explorers enjoying local delights before setting off

At 4,061m, Gran Paradiso is the highest mountain completely within the Italian border, set in a National Park famous for ibex. It’s a popular route, and very organised. Parties climb with one guide per four participants, and as a group of thirteen, our London Stone cohort was joined by Alice, Jacopo, Elils, Alberto and Claudio. And they’re strict. On the second day, with breakfast at 5 a.m., the guides stressed that everyone would be moving off at 5.30, not just gathering outside in preparation.

“We powered out of the hut onto the trail in head-torches,” said Gavin. “You aim to hit the glacier just as the sun’s coming up.” At the glacier, the guides create parties of three or four as you arrive; there’s no waiting for a particular buddy. Then, roped up, crampons affixed, you begin the long zigzag up the glacier. 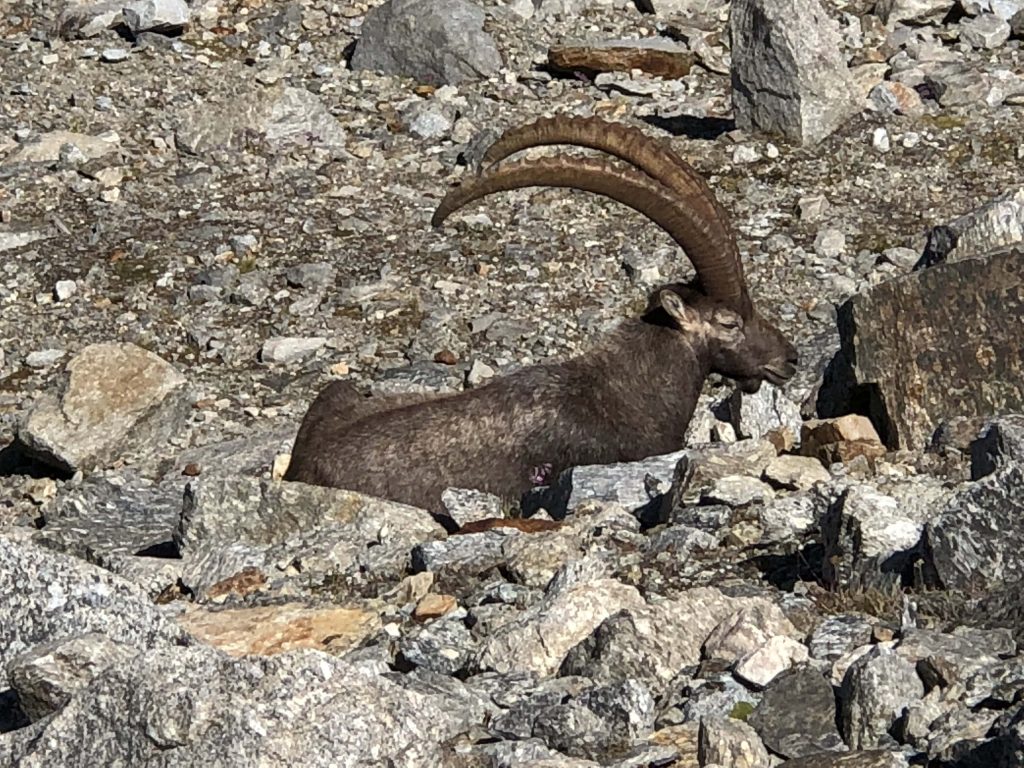 An Alpine ibex - no sponsorship required needed to climb a mountain.

“The crevasses - you can’t see the bottom,” said Gavin. “It’s really disconcerting the first time and you’re really careful when you step over.” The instruction was not to make the rope so slack that it touched the glacier.  “You’ve got to make sure that when your colleague crosses the crevasse you leave enough slack rope, so they’re not pulled back, but not have too much slack, as if they fall they’ll build up momentum. So you’re constantly thinking about that, and foot positioning. The ice is very bumpy.”

Crevasse-wise, you soon get used to it, it seems. “It was terrifying,” says Gavin. “But we were on a mission. You soon literally just hop over.”

What no one was quite prepared for was the bitter cold that arrived after hours of walking, two-thirds up the mountain. “Fingers like frozen sausages,” says Gavin. “Couldn’t bend them.” Luckily 40 metres from the top, the wind dropped. “I thought we were home and dry,” adds Gavin. “The hard work was done.”

Funny how even videos can’t quite bring home the reality. “Nothing can prepare you for it. We had to shimmy across a 6-inch ledge, 3 metres wide. With a 200 metre drop. There was room for one foot at a time. You put your hands in cracks in the rock and clipped yourself onto carabiner fastened into the rock. It was a real mind-over-matter situation.” 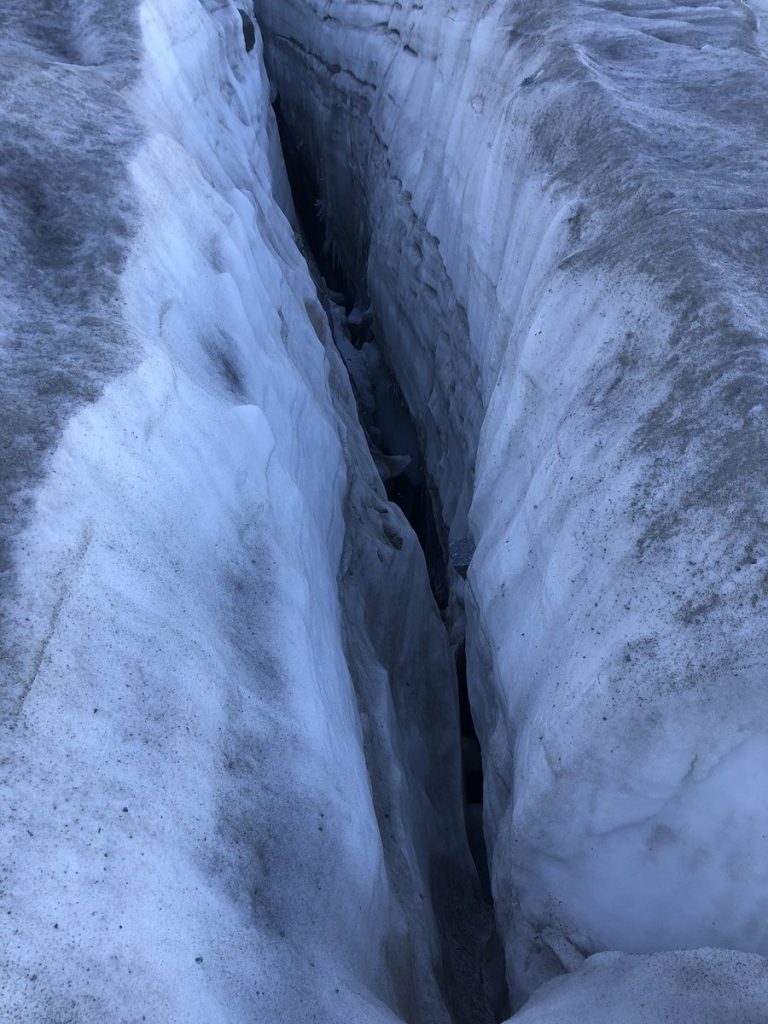 A bottomless crevasse - not for the faint hearted.

But they reached the top! Not all the climbers who set out that day did. It’s a very popular route, which is why it’s so strictly overseen. If climbers don’t reach the summit by 11 a.m. or appear not to be on schedule to do so, the guides turn you around. This is because you need to be clear of the moraine - the rocks that are deposited by a glacier at its extremities as it moves down a mountain - by 1 p.m. because the rocks, released from ice by the warmth of the sun, start falling. “We saw huge rocks, the size of a beachball, crashing down the glacier,” says Gavin.

After the long trek back down, the team stopped the night in a town on the route back to the airport. Quite a bit of ice cream was scoffed the following morning during a somewhat gingerly conducted walk around the streets.

“I’ve never been so stiff in my life!” says Gav, who is no slouch when it comes to going up places like Helvellyn and Striding Edge. “There was a blister-off on WhatsApp between team members, and it was Thursday before I was walking properly again.” 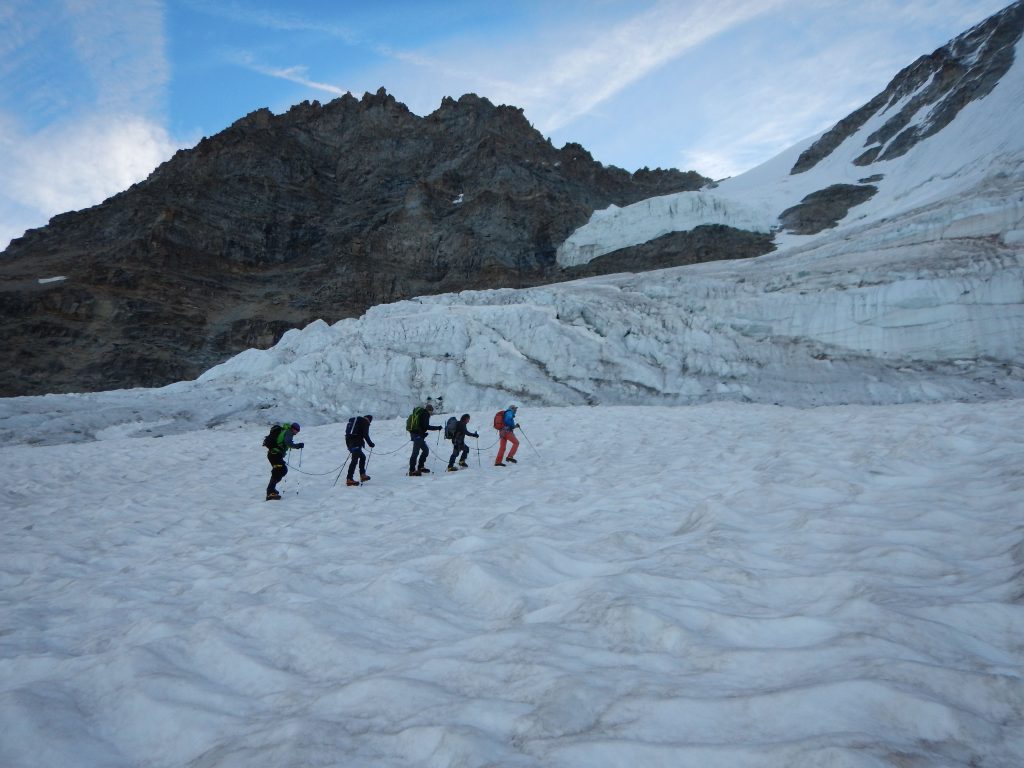 A climb team of four, plus guide trek across the glacier.

However, it was worth the temporary pain. We have so far raised £11,800 raised for Team Felix, so sore muscles and the odd injury have paled into oblivion. Thank you to the team: Antony Pasquini, Chris Durnford, Chris Gibson, Claire Duhig, Craig Potter, Jamie Butterworth, Jin Sheng Lim, Justyna Pietruszka, Mike Edwards, Sophie Wood; and friends Daniel Leigh and Ron Verlander.

And a very special thanks to all of you who have helped us raise such a massive amount. If you’d like to add to what we’ve raised so far, just pop along to our Just Giving page.

It would be a shame if the budding London Stone mountaineering club only had one outing, wouldn’t it? So, is it something that might happen again, Gavin?